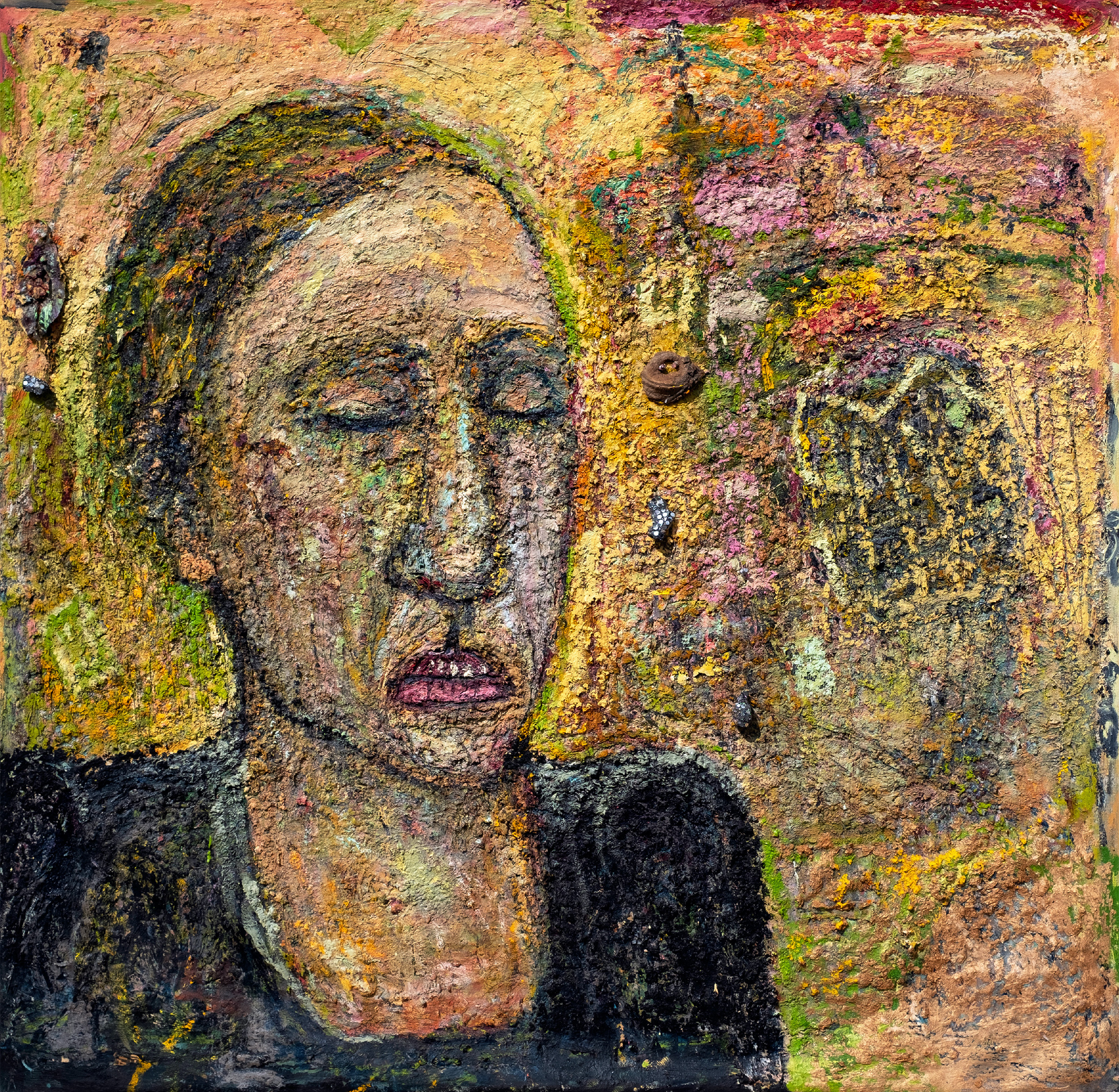 Exhibition shines a spotlight on the late Miriam Beerman, a New Jersey artist whose works are included in the permanent collections of over 60 museums worldwide and a female pioneer in the 20th-century art world

WEST LONG BRANCH, NJ—The Monmouth University Center for the Arts announces the launch of its fall 2022 season with Miriam Beerman: 1923–2022 NOTHING HAS CHANGED.

The exhibition showcases Beerman (1923–2022) as one of the 20th-century’s most provocative artists, whose humanist expressionist works highlight her talent as a colorist. A pioneer as one of the first female artists to be given a solo exhibition at the Brooklyn Museum of Art, Beerman is part of a canon of 20th-century women artists who were nearly lost to obscurity due to their gender in a male-dominated art world.

The show runs from September 6 to December 11 in the Rechnitz Hall DiMattio Gallery in the Monmouth University Center for the Arts. An exhibit closing reception is scheduled for December 11, Sunday afternoon with a 12-1pm in-exhibit-hall film screening of the 53 minute Miriam Beerman artist documentary Expressing the Chaos followed by a 1-4pm reception with informal salon conversations with guest curator James Yarosh.

Influenced by the social injustice seen around her, Beerman shines a spotlight on the horror and pathos of man’s inhumanity to man. The themes prove to be timeless, resonating today as much as when they were created in the 20th century. Her life and art were explored in the 2015 documentary Miriam Beerman: Expressing the Chaos.

Nearly 20 large-scale canvases by Beerman will be represented. The show is guest curated by gallerist James Yarosh and draws upon the recent exhibition Miriam Beerman – REDISCOVER, shown at James Yarosh & Associates Gallery in Holmdel, N.J., which opened in spring 2022. The exhibition, Miriam Beerman, 1923-2022 NOTHING HAS CHANGED marks the second guest curator role at the university for Yarosh who curated Sheba Sharrow: Balancing Act in 2017. A companion show of Beerman’s works on paper and collages is simultaneously on view at James Yarosh & Associates Gallery.

“Living with Miriam Beerman’s paintings at the gallery with the current exhibit REDISCOVER, one cannot help but be both moved and stirred to be in the presence of the colossal works, heavy with paint, laden with subject. When you see these humanist expressionist works existing silently, holding the weight of the world, you begin to understand the gallery’s presentation,” says Yarosh, a gallerist fueled by curatorial activism in recent years. “As I described Miriam’s art with clients, it occurred to me that those words also described the role of female artists of the 20th century whose voices were more stifled in favor of male artists—and of women’s roles in a patriarchal society.

“If our art history is male-dominant, and the artists before us our teachers, we are only getting half the lessons to be learned,” he continues. “We have an opportunity to do better. This presentation with Monmouth University allows the conversations to continue and include a younger generation.”

“NOTHING HAS CHANGED picks up the dialogue from the 2017 Sheba Sharrow: Balancing Act exhibition. Although their art is different, the mission is similar: A female artist who rails against social injustices in her art as a call to action to evoke change,” says Scott Knauer, Director of Galleries and Collections, Department of Art & Design, Monmouth University. “Much of the subject matter that Miriam Beerman delved into is still so relevant and threatened today: political, social, religious rights, women’s rights and threats against minorities.”

The show's title piece, Beerman’s 2009 canvas Nothing Has Changed, (shown above) is described by Yarosh as “a later work, a portrait of a monumental female face, whose eyes are closed in resignation of her role. She disappears behind the facade of joyous yellows and pink, and yet her hopes are painted on the right—an abstract dream vision of her imagined joy, to run away, to color outside the lines and create her own ideas of ‘happy ever after.’ The archetypal portrait is Beerman’s Mona Lisa, except here, the smile is upside-down.”

Gallerist Mitchell Algus and artist Heather L. Barone (a mentee and longtime assistant of Beerman) and Corey Dzenko and Theresa Grupico in the Monmouth University Department of Art & Design are contributing to the catalogue. A smartphone tour is also being planned with a potential online discussion with artist, author and former Asbury Park Press art columnist Tova Navarra. Other planned events include a series of salon evenings, a Q&A evening with the Expressing the Chaos filmmaker and an event closing show. For details on upcoming events, visit the “What’s New” page on the James Yarosh Associates Fine Art & Design Gallery website: www.jamesyarosh.com. 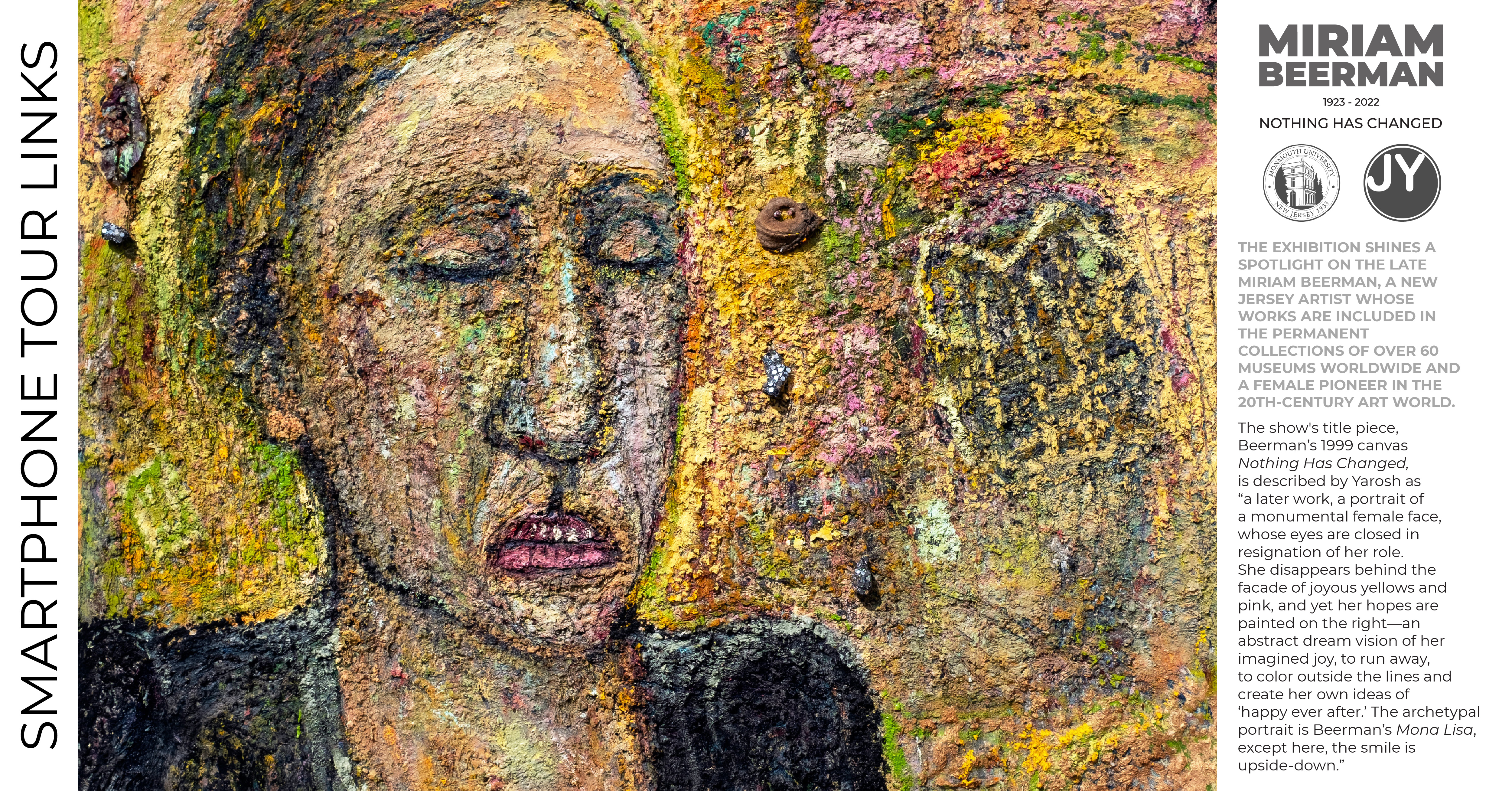 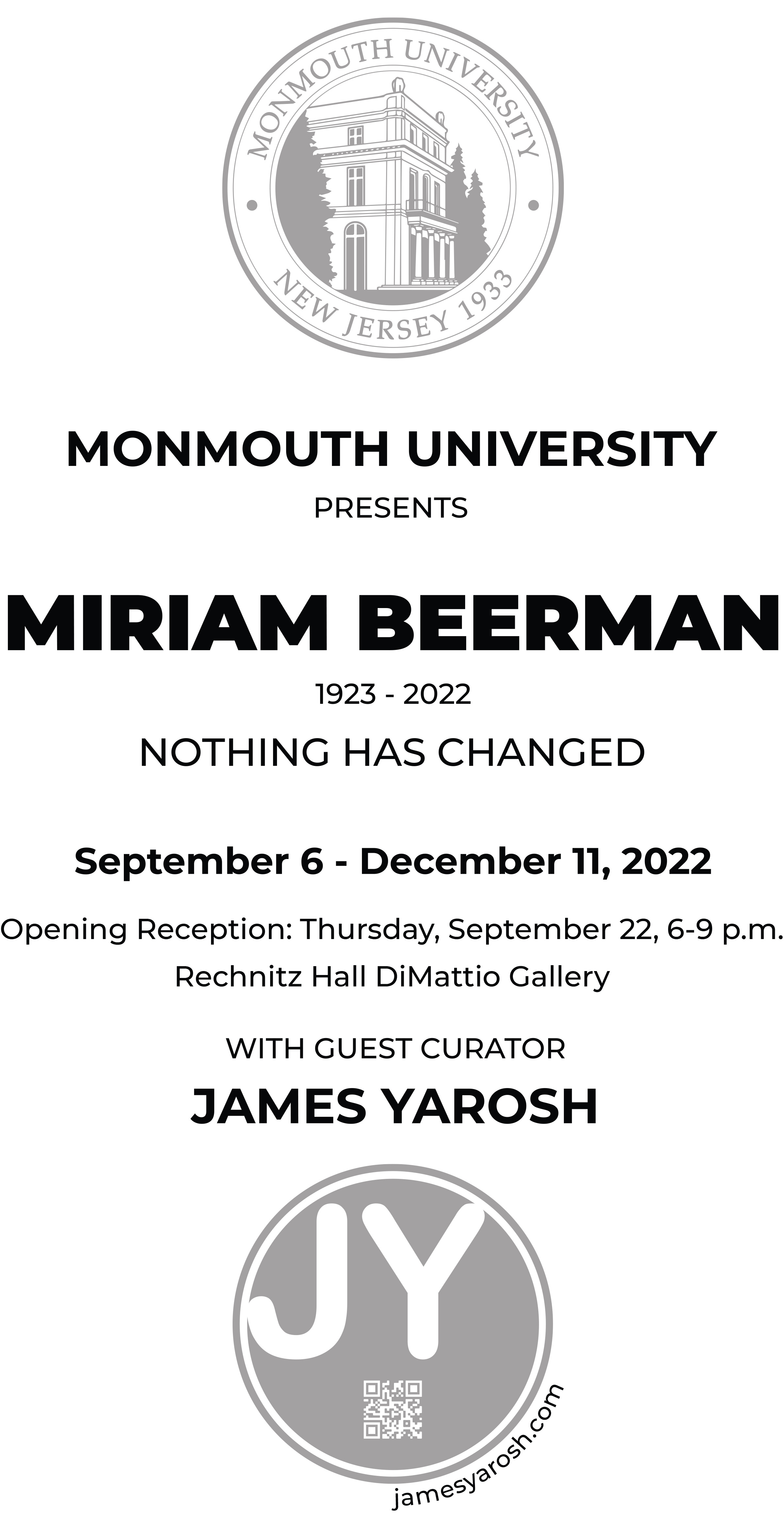 ABOUT MIRIAM BEERMAN: Miriam Beerman studied painting at the Rhode Island School for Design, where she earned a BFA. Afterward, she spent two years in France as a Fulbright Scholar, working in Atelier 17 and having her painting critiqued by Marcel Brion. In New York, she studied with Yasuo Kuniyoshi at the Art Students League and Adja Yunkers at the New School for Social Research. She has had over 30 solo shows, including at the Brooklyn Museum, Graham Gallery, the New Jersey State Museum and the Everson Museum.

Beerman’s work is included in many major collections, including Metropolitan Museum, Whitney Museum, LACMA, National Gallery of Art, Phillips Collection, National Museum of Women in the Arts, Victoria and Albert Museum, the Fitzwilliam Museum in England, the MEAM in Spain, the Israel Museum and the National Portrait Gallery in Washington, D.C., among others. Beerman’s painting “Scorpio” is also currently on display as part of The Vault Show exhibit at University of Arizona Museum of Art through fall 2022. She has won many awards, including awards from the Joan Mitchell Foundation, Pollock-Krasner Foundation, RSID and others.

ABOUT MONMOUTH UNIVERSITY: With the opening of the Joan and Robert Rechnitz Hall at Monmouth University, the creation of the DiMattio Gallery was also celebrated. Dedicated in 2013, the DiMattio Gallery is named in tribute to Professor Vincent DiMattio, a teacher and artist at Monmouth University since 1968. This two-story state-of-the-art gallery offers nearly 2,000 square feet of exhibition space. In addition to presenting student exhibitions, the DiMattio Gallery has recently showcased exhibits including “Bruce Springsteen, A Photographic Journey,” as well as Jacob Landau and Robert Mueller collections.

ABOUT JAMES YAROSH: Established in 1996, the James Yarosh Associates Gallery in Holmdel, New Jersey, was founded upon and remains loyal to its vision: to represent fine art for art’s sake and to curate gallery collections and thoughtfully present art and interior design specification with an artist’s eye and understanding. Yarosh, an artist and well- published interior designer, offers a full-scale gallery and design center where clients can associate with other like-minded individuals located just one hour outside Manhattan.

Yarosh advocates for what greatness looks like in the arts, showcasing at his destination gallery the works of both new and established museum-recognized artists of merit in a space designed to replicate the intimacy of an artist’s home. Current exhibitions such as Miriam Beerman – REDISCOVER (2022), The Humanist Show (2021), Sheba Sharrow: History Repeats (2020) and the NYC art fair Art on Paper (2021) help foster the idea of art as intellectual engagements that sit above decoration in design hierarchy, adding exponentially to the experience of living with art.